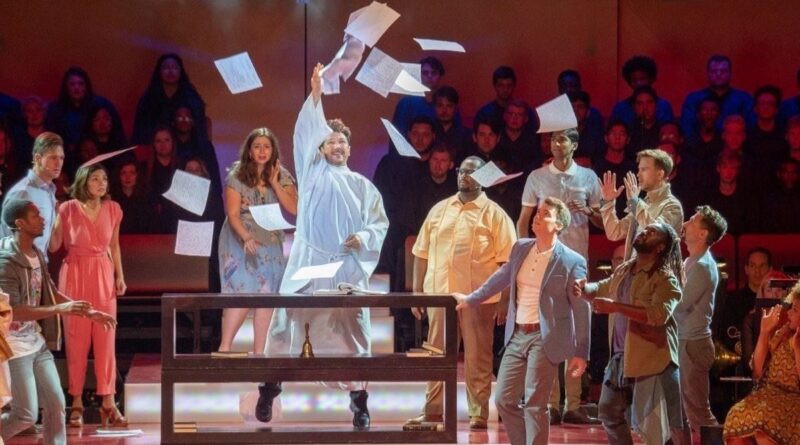 When Ravinia President and CEO Welz Kauffman and Chief Conductor and Curator Marin Alsop presented Leonard Bernstein’s little-seen music theater masterwork Mass as the centerpiece of Ravinia’s 2018 celebration of the iconic conductor and composer’s centennial, the Chicago Tribune declared it one of the best concerts of 2018, and audiences clamored for a repeat performance. Ravinia obliged, reuniting more than 200 onstage artists—including the Chicago Symphony Orchestra, Vocality, a cast of “Street Singers,” and even the local high school marching band—for a single 2019 encore that Ravinia arranged to have filmed. The result premieres as an installment of the seminal PBS series Great Performances on, May 15, at 9 p.m. on PBS, pbs.org/gperf and the PBS Video app, including on Chicago’s own WTTW, Channel 11.

A virtual “panel discussion” will be livestreamed on Ravinia’s Facebook page just prior to the broadcast, beginning at 8:15 central time. For this talk, Alsop and Kauffman will be joined by Tony Award-winning (South Pacific) singer/actor Paulo Szot, who starred in the central role of the Celebrant in both Ravinia performances, as well as Chicago Children’s Choir’s artistic director, Josephine Lee, and Highland Park High School band director Joshua Chodoroff. The panel will be moderated by WFMT Vice President and general manager George Preston.

“Whether as the composer of West Side Story, or the longtime Music Director of the New York Philharmonic, or as ‘America’s Music Teacher’ behind those legendary Young People’s Concerts, Bernstein is a name most everyone knows. So imagine what a rare honor it is to revive a work that so few people had actually seen because of the tremendous resources required to put it on,” Kauffman said. “When we saw the result, we knew we had to not only capture it for posterity but also to share it with the world. The coincidence that this show—about the loss and restoration of faith in times of crisis—will be broadcast in the midst of a global pandemic adds a heart-breaking immediacy to this long-dormant masterpiece. That said, viewers shouldn’t be fooled by the title. This is not a sermon, nor is it a sacred work like Verdi’s Requiem. It’s more in line with Hair and Jesus Christ Superstar as a contemporary musical facing contemporary questions with wit, intelligence, and beautiful music.”

The television program begins with a brief history of the work, which has rarely been performed since it was commissioned to open the Kennedy Center in 1971. Its 2018 performance marked its premiere for both Ravinia and the Chicago Symphony Orchestra. That performance prompted a re-teaming of Alsop and director Kevin Newbury after they earned a Grammy nomination for their 2005 recording of Mass with the Baltimore Symphony Orchestra.

The televised production, filmed at Ravinia on July 20, 2019, brought Alsop and Newbury together again with the CSO; Chicago Children’s Choir and Vocality, both led by Josephine Lee; the Highland Park High School Marching Band; a cast of “street” performers; and baritone Paulo Szot, performing as the Celebrant at the center of it all.

Central to the theme of societal pressures eroding faith is a searing series of letters read by the street performers who cry out to the heavens. Ravinia connected the students from its Reach Teach Play music education programs to the drama by having them write their own letters about what gets them down and what brings them back up. Ravinia published those letters and will make them available on a special page devoted to Mass at Ravinia.org.

Ravinia is North America’s oldest music festival, dating back to Aug. 15, 1904. The CSO first played the festival in 1905, and in 1936 Ravinia became the orchestra’s official summer residence. In addition to the CSO, Ravinia presents chamber music, jazz, and all manner of popular music in more than 140 events every summer.

Bernstein’s own history with Ravinia began on July 4, 1944, with his CSO debut—just eight months after his astonishing New York Philharmonic debut at Carnegie Hall. He conducted 10 more CSO programs at the festival through July 28, 1956. He returned to Ravinia in 1985 to conduct the National Symphony Orchestra on tour and finally in 1986 as Laureate Conductor with his own New York Philharmonic on tour. As pianist, he performed Ravel’s Piano Concerto with Herman Felber Jr. conducting the CSO on July 6, 1944. In addition to his own First and Second Symphonies, Serenade, Suite from Fancy Free, Songfest, Symphonic Dances from West Side Story, and Overture to Candide, Bernstein also conducted works by Beethoven, Brahms, Casadesus, Copland, Haydn, Liszt, Mozart, Schumann, Shostakovich, Sibelius, R. Strauss, Stravinsky, and Tchaikovsky at Ravinia. 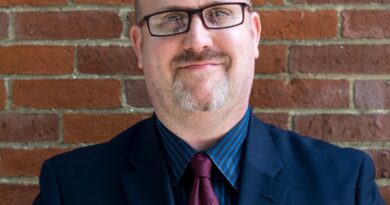 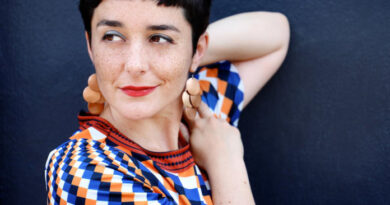 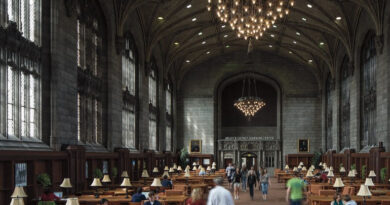