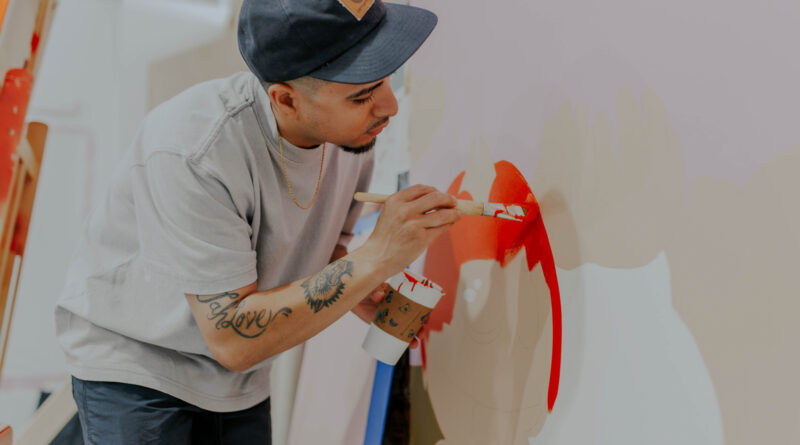 Throughout the Elmhurst Art Museum’s 25th year of inspiring its community, the museum will host a year-long celebration with a focus on the three major hallmarks of its mission: architecture (spring), education (summer), and art (fall). The milestone year will culminate in the fall season with the first solo museum show of Pilsen-based street artist Sentrock, who seeks to uplift and empower youth through his murals and educational projects. The multi-media exhibition will feature new work by the rising artist that reveals for the first time the origin story of his distinctive Bird City Saint character, which appears in over 20 prominent murals Chicago and other cities. Sentrock: The Boy Who Wanted to Fly is open September 9, 2022, to January 15, 2023.

Joseph Perez, best known as “Sentrock,” is a self-taught street artist who creates large-scale, colorful public mural works. He views street art as a gesture of compassion for his community and a powerful form of expression that encapsulates his Mexican-American background, upbringing, and history. With spray can in hand, he developed his work from graffiti writing to his now highly stylized and recognized street art featuring the Bird City Saint character that wears a bird mask. He describes this signature mask as a means of an individual’s personal expression, strength, and hope.

For this exhibition, Sentrock presents a new signature mural in the galleries as well as animated video projections, a ten-foot-tall sculpture, a life-size birdhouse installation, paintings, and works on paper that reveal narratives about the Bird City Saint character, and its origins in the artist’s biography. Presented across numerous galleries, the exhibition will explore the dreams of a little boy living in an urban environment, the importance of his Mexican-American community, and why the boy has a bird mask.

Sentrock gives back to the Latinx community through various educational and mentor projects with local youth, food, and clothing drives in his neighborhood, and more. His recent projects include collaborations such as a summer youth workshop with Apple, collaborations with the Chicago White Sox and Chicago Bulls, plus brand ambassadorships with Chicago Fire, Footlocker, and more. His murals have been commissioned by the City of Chicago, Chicago Design Museum, Chicago Public Libraries, National Geographic, Chicago Fire, and others. More than 20 of his murals appear throughout Chicago, and in other cities such as Detroit, Miami, New York, Phoenix, and Los Angeles.

Says EAM executive director John McKinnon, “On the occasion of our 25th Anniversary, we are thrilled to host the first solo museum show by Sentrock and continue our commitment to supporting exceptional artists from Chicagoland. We are excited for audiences familiar with Sentrock and his Bird City Saint character to learn of their compelling origin stories, and for others not familiar to get a wonderful introduction to the rising young artist as he translates his work to museum galleries for the first time.”

The Elmhurst Art Museum promotes a commitment to expanding and strengthening its relationship with Chicago’s broader western suburban community and introducing them to the most exciting regional and national artists of our time. 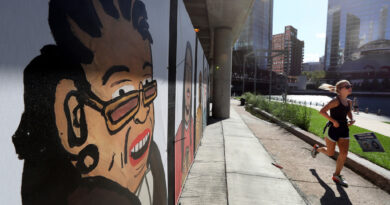 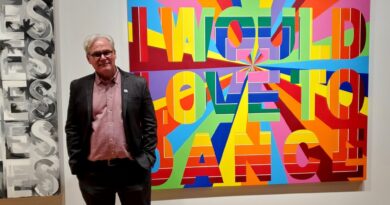