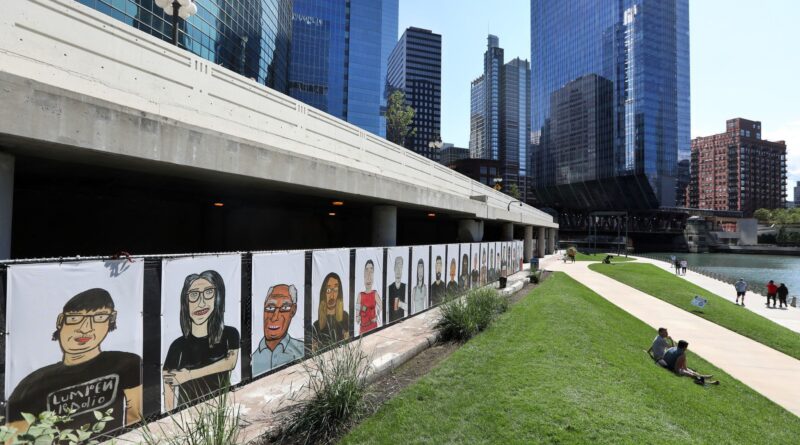 The world feels like an especially hard place at the moment — a place that needs art and expression now more than ever. So what do artists do when galleries and museums are closed thanks to a global pandemic? They get creative and bring the art to the people.

Chicago has always had its share of public art. The Picasso sculpture in Daley Plaza, the Art Institute Lions, even the gaudy and glorious Santa L comes to mind. Now that one of the only ways citizens of the Second City can take in art is through public displays, the city and its artists are placing a higher importance on putting art in places it can make the greatest impact.

Over the summer, The City of Chicago unveiled a new installation from Don’t Fret, one of the city’s most well-known artists. The piece, entitled The People in Your Neighborhood, is at the Riverwalk’s most western point, known as The Confluence, between Lake Street and Franklin streets. It features 55 portraits of Chicagoans, taking the time to celebrate everyone from Claudio Velez, Chicago’s beloved tamale vendor, to Howard Brown Health doctor Abby Baus to fellow esteemed artist Theaster Gates.

“There are certain character traits that I think define a true Chicagoan. Tough, full-browed with a sense of ingenuity and Midwestern humbleness, but always toiling, working, moving forward with an almost absurd laugh and grin about this crazy, wonderful city,” says Dont Fret. The artist was commissioned to paint 55 portraits of Chicagoans who he thought contributed to the hard work that defines our city, though, he insists, “It can only scratch the surface of the millions of stories moving through our streets. These are the people in your neighborhood.”

In addition to The People in Your Neighborhood, the Chicago Riverwalk also unveiled The Radiance of Being — a mural by Chicago-based artist Kate Lynn Lewis. The work celebrates 100 years of Art Deco. Lewis is also one of the 55 Chicagoans portrayed in Dont Fret’s installation.

Chicago artists and their work are also reaching far beyond the well-traveled Riverwalk and into neighborhoods and communities that might not have the opportunity to stroll along the river or into an art museum — even without the current pandemic serving as an obstacle.

Barrett Keithley, a Chicago artist who is co-founder of the organization Paint the City, is using art to help people work through the pain of the current American landscape and the county’s racist history. Together with co-founder Missy Perkins, Keithley has assembled a team of over 75 volunteer artists to partner with Chicago businesses to transform boarded up buildings into makeshift art galleries.

At a recent Chicago Loop Alliance panel discussion on the transformative power of public art, Keithley said, “Folks don’t understand why so many black folks are mad. Art takes people out of their bubbles and boxes.”

He added that we all have personal stories that can help folks find connection with each other. “People are liberated a lot of times when other people tell their stories,” he explains. “At Paint the City, our mission is to heal the city through art.”

Keithley is in good company as there are plenty of muralists who share his passion from bringing art to the people.

Southside artist Caesar Perez (Czr Prz) is a muralist widely known for his lively, large colorful work, which can be found throughout the City of Chicago, the U.S., and in countries around the world. Though he’s always focused on art that inserts itself into viewers’ paths as they move through their days, he’s finding that the work feels a bit more important at the moment.

Prz explains, “(The pandemic) has got me to work more into (sic) public art being that people aren’t really going to galleries.”

He notes that there’s been a lot more interest in public art as street artists and organizations like Paint the City have started to use the plywood found boarding up windows as opportunities for murals and self-expression. While he has gotten offers for commissions to paint Black Lives Matter murals in the wake of the summer’s protests, he turns them down because he feels Black artists should benefit from those jobs.

“People are doing the boarded up thing, but I would give those to artists of color because I felt that I should,” Prz says.

Artists across the city are working hard to lift each other up either by sending commissions to folks better suited for the work like Prz does or by finding new ways to collaborate together during this challenging time.

One of Joyo’s recent pieces can be found on the wall of Setna iO — a West Side business that makes aircraft parts. Joyo and two other Chicago artists collaborated on a three-paneled mural that showcases each of their unique styles.

Exclaims Joyo,“ The Setna wall was super fun. I was working with Orbe and Megan Kind. I prefer to work with people because, not only are we working together on a project, I get to learn from them. I’m still very inexperienced as far as doing murals and using spray paint.”

The first mural Joyo created began before the pandemic, and while public art might have grown in importance with galleries and museums closed in response to COVID, those spaces for art weren’t really a regular part of many citizens’ lives anyway.

Explains Joyo, “Not a lot of these institutions are readily available or accessible for people to look at and get inspired by. It’s awesome because we’re giving people a chance to see art.”

In addition, Joyo is looking to the artist community and the community at large to take care of each other as the country reckons with its history of racism.

“As a black person, we’re going through two pandemics,” says Joyo. “We have to check up on each other, be there for one another. We’ve learned we can’t do this thing alone. We’re stronger when we’re together. You can’t do these things by yourself.”

“Craftivist” Shannon Downey knows a thing or two about the power of a group of artists. In September of 2019, Downey purchased an unfinished quilt at an estate sale with the intention of finishing it to, as she puts it, “ensure the soul of the original artist could rest in craft peace.”

As it turned out, the project — eventually known as “Rita’s Quilt” —  was too big for a lone stitcher, so Downey sent out a call for help. In no time, nearly 1,000 folks had volunteered to lend a hand, with individuals from across the country helping with embroidering, piecing squares together and quilting.

Downey’s plan was to spend a year touring the country in an RV, bringing her unique brand of craftivism and Rita’s Quilt to different communities so that the folks who helped with individual bits of the quilt could see the final product in person and share it with their families.

“COVID was a huge blow for me for a little bit,” she confesses. “I had been planning this tour for a year and had hundreds of events lined up across the country. They were all cancelled.”

Despite the setback, Downey decided to hit the road anyway. Though the tour isn’t what she originally envisioned, Downey is still finding ways to bring art into communities. She says, “I’ve been able to host some micro, outdoor, distant workshops and stitch-ups with the folks hosting me and their family and friends.”

Folks are also finding their way to Downey online, so she’s been able to connect with people who are looking for an outlet for their own creativity and passion for needlework.

“I’ve found that folks are finding that they suddenly have time to make art,” she explains. “A majority of folks who are attending my virtual workshops, for example, comment on how they have been wanting to take a workshop with me or wanting to learn to embroider for years but didn’t have the time. They are looking for ways to express themselves that are conducive to life in a pandemic. They have a lot to say, a lot of frustration, and they are ready to stab it out.”

One thing a lot of casual art fans might not consider is that these artists need to find ways to sustain themselves financially, in addition to sustaining themselves creatively. Some artists are able to make a living from commissions, grants and fees for their online classes, but others are really counting on people who buy their art.

Fortunately, artists aren’t the only ones finding creative solutions right now. Amy Amdur who runs Amdur Productions — the organizer of nearly thirty Chicagoland art festivals each year — is navigating these extraordinary times by finding new protocols to keep guests safe and to make sure artists can make a living, also.

“We still haven’t had a major support program from the state or nationally for artists,” laments Amdur. “I see artists really trying to figure out how to make ends meet.”

With that in mind, Amdur and her team put together a collection of summer, fall and virtual festivals that honor the work of artists and help them make a living, too. Though the events are free to attend, Amdur Productions requires guests to reserve tickets for a specific time slot in order to prevent large numbers of people gathering.

As it turns out, the adjustments have had some lovely side effects. Beyond keeping people  safe, Amdur notes that having fewer people crowding into the festival at any given time makes it easier to savor the experience. She explains, “I have to say, doing these events now — they’re so pleasant. The public, instead of being overwhelmed by too much visual stimulation, they get to talk with the artists.”

Patricia Walsh, Public Art & Civic Design Senior Program Manager at Americans for the Arts, was also part of the recent Chicago Loop Alliance panel discussion and is finding that art has become an important part of this moment in history across the country. Cities are getting creative in using landmarks to remind people to wear masks, and they’re creating apps that allow friends and family to take socially distant artworks outdoors.

She notes that even the vandalism of monuments can be an important part of the conversation. There’s some debate among art educators and activists about whether those pieces now serve a new purpose in helping create a dialogue as the country reckons with racism or if the monuments should be taken down entirely.

Though she’s interested in how art can spark debate and discourse, Walsh notes that more than anything, art is something that brings us together. She says, “As humans we just want to connect with each other.”

If heading outside to a festival or installation isn’t doable, art lovers still have plenty of options. It may be awhile until artists can share their work in galleries and museums, but art is readily available to anyone with a computer, tablet or smartphone. Though not the same experience as in-person viewing, to be sure, the beautifully curated Instagram images of art in progress, completed pieces, inspiration and a peek behind the scenes can help Chicagoans and people from around the world appreciate the talented Chicago artists who are doing what they can to create work that sparks discussion, soothes the soul and makes the city a richer place for everyone who lives here. 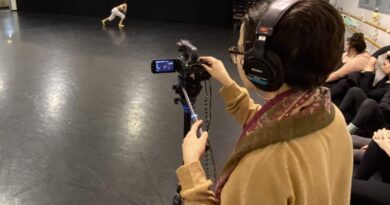 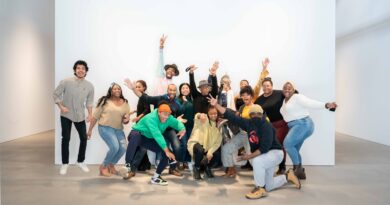 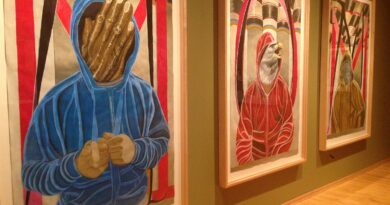